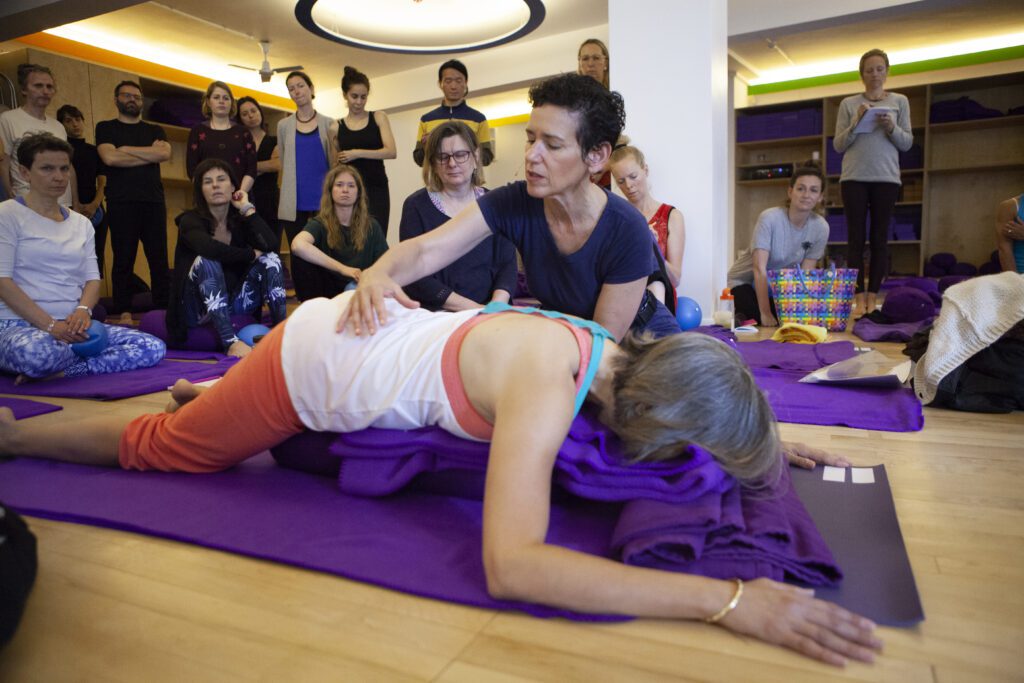 Sacroiliac joint pain is extremely common in yoga practitioners, notes renowned yoga teacher and author Donna Farhi in this free download. One of the most common issues she sees when teaching workshops worldwide is people complaining of pain radiating from the sacroiliac joints.

In her own practice, Donna notes, she began developing SI joint problems early on when she began practicing yoga many hours a day. It took her years to learn how to create greater stability and ease in her own sacroiliac joint. This in turn laid the foundation for her work helping yoga students avoid SI joint issues or resolving issues that have already developed.

SI joint problems are increasingly common in modern day yoga practices, because the repertoire of movements generally used is not functionally balanced, Donna notes. Flow practices can be a particular problem, because they combine a lot asymmetrical movement done very quickly and often by relatively inexperienced practitioners, who do not have understanding of alignment or correct transitioning from pose to pose. With this, you have a situation where people are flinging themselves around in extreme ranges of motion without proper alignment, which in turn erodes the stability of the SI joint

Donna further talks about the other major contributor to SI joint problems, i.e. a misunderstanding of how the pelvis and the hip joints function in relationship to each other and how that manifests in standing poses and in supine work. One of the most potentially harmful instructions, she notes, is to tell students to square the hips to the front in wide-legged asymmetrical standing postures. She explains just how this creates problems, not just for the SI joint, but for knees and for hip joint as well.

She further notes that one of the things that we tend to not be conscious about in the yoga community is the origin of yoga postures. Many yoga styles were developed for a specific group of people with specific physical characteristics, e.g. young teenage boys in the case of Ashtanga Yoga. But in today’s yoga environment, we often forget that there are anatomical differences and that you can’t teach yoga the same way to every person.

If people are given the tools to feel proper alignment in a posture, they’re quite capable of adjusting their postures for themselves, says Donna. Once people get a felt sense of that, they just have to be encouraged to trust it.

The good news is that there are millions of people worldwide who are looking for competent yoga teachers who emphasize accessibility and practical relevance for the everyday person in their teaching. There’s no shortage of students for teachers who learn how to teach in a way that works for every body.

You might also enjoy Donna’s course, Yoga for Lower Back Pain–Keys to Sacroiliac Stability and Ease of Movement. Donna Farhi has been practicing and teaching yoga for more than four decades. She is one of the most sought-after guest teachers in the world, leading intensives and teacher training programs internationally.

GET ACCESS NOW
I appreciate the work you do very much. Keep it up! You really raise the bar for yoga education. I will savor all the material on my Dashboard.
Barbara P.
I wanted to expand on my thank you. Yoga U Online has been an absolute lifesaver for me. I moved from a yoga mecca to a yoga desert. Instead of having my choice of teachers and styles and special workshops, I now have to travel an hour to take a class. The excellent teachers and interesting topics at Yoga U Online have kept me moving ahead in my practice. I am grateful for all the wonderful yoga you bring to me. Thank you.
Beverlee
My students will appreciate all the gems I've picked up from your teachers.Thank you so much!
Beth O.