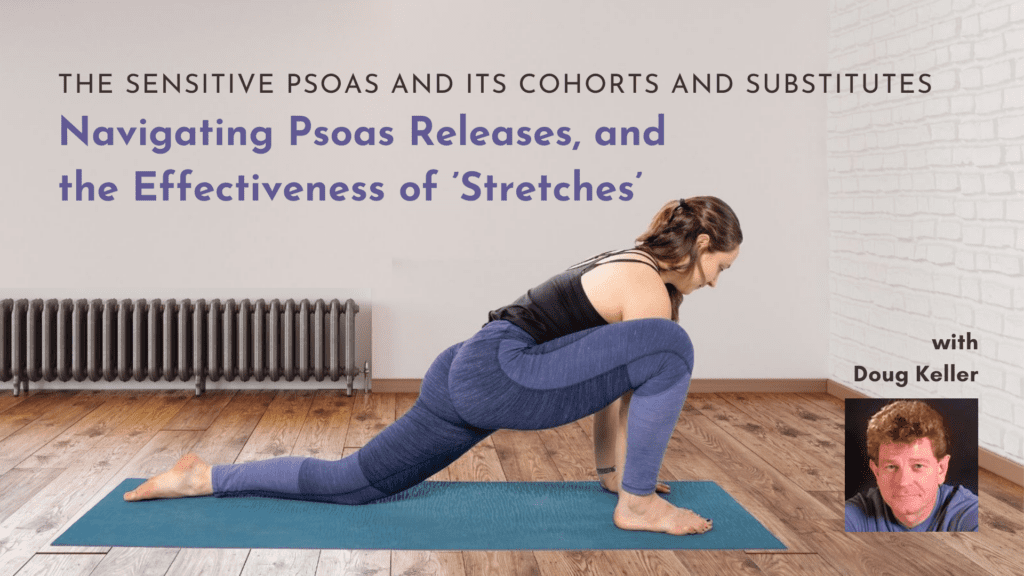 The Sensitive Psoas and Its Cohorts and Substitutes: Navigating Psoas Releases, and the Effectiveness of ‘Stretches’

You may have already heard lots about the psoas, and why it’s so important to release tightness in the psoas muscles.

The psoas muscle has long been recognized as central to balanced posture and movement. Imbalances in the psoas are often implicated in cases of lower and mid back pain, groin pain, hip pain, and even herniated discs.

Because of its links to the fight-and-flight stress response, chronic tightness in the psoas can affect us mentally and emotionally as well by trapping us in mind-body patterns that don’t serve us.

But did you know that many of the practices for psoas releases or stretching typically recommended can be counterproductive?

In this online course, renowned yoga teacher and author Doug Keller will give you a comprehensive guide to how to work constructively with the psoas muscle in your yoga practice.

Some of the questions Doug will cover include:

The Problem with Common Approaches to Psoas Release

The psoas muscle doesn’t work in isolation, and many so-called psoas stretches run up against tightness in muscles that function as psoas substitutes, reducing and undermining the effectiveness of the stretches.

Knowing the distinction is important in order to fine-tune your practice and your understanding of what actions to introduce in yoga poses to get the maximum benefits.

The psoas muscle is so deep and involved in so much of our movement, including the breath, that we have to go through layers of muscle that support and replicate its function before we even get to it.

We will start with the sensitive psoas itself and chart its effects upon the body, particularly the low back and the breath. Doug will show why yoga aims to release the grip of the psoas muscle, rather than simply ‘stretching’ it.

How do we do that in our practice, and what is our approach?

When we DO feel a ‘stretch’ in the psoas, what we’re more often feeling are its substitutes. There’s a definite value to ‘stretching’ these since they tend to be palpably tighter, and we can’t really get to the ‘release’ of the psoas except by going ‘through’ them.

Learn how to understand the role of the psoas substitutes, what their effect upon us is when they’re tight, and how certain poses and alignments address them directly and open the doors to working more directly with releasing tightness in the psoas itself.

This course will give you news you can use, and an appreciation of just how much we are layered beings, in feeling and in movement — and how yoga helps us glide through these layers to the self that is our ‘core.’

What You Will Learn:

This course qualifies for 5.5 non-contact hour CEs with Yoga Alliance.

Doug Keller’s background reflects a lifelong commitment to studying, imbibing and sharing the vast field of knowledge and practice known as yoga. He spent a total of 14 years doing service, practicing, and teaching yoga.

GET ACCESS NOW
I appreciate the work you do very much. Keep it up! You really raise the bar for yoga education. I will savor all the material on my Dashboard.
Barbara P.
Your website is a blessing to guide me deeper into my personal practice and my teaching practice.
Annmarie
You are doing a great service! I live in Mexico and your on-line events have been a terrific way for me to stay in touch with yoga colleagues and continue learning from teachers of the highest caliber.
Arielle N.