Restorative Yoga for Ethnic and Race-Based Stress and Trauma: An Interview with Gail Parker 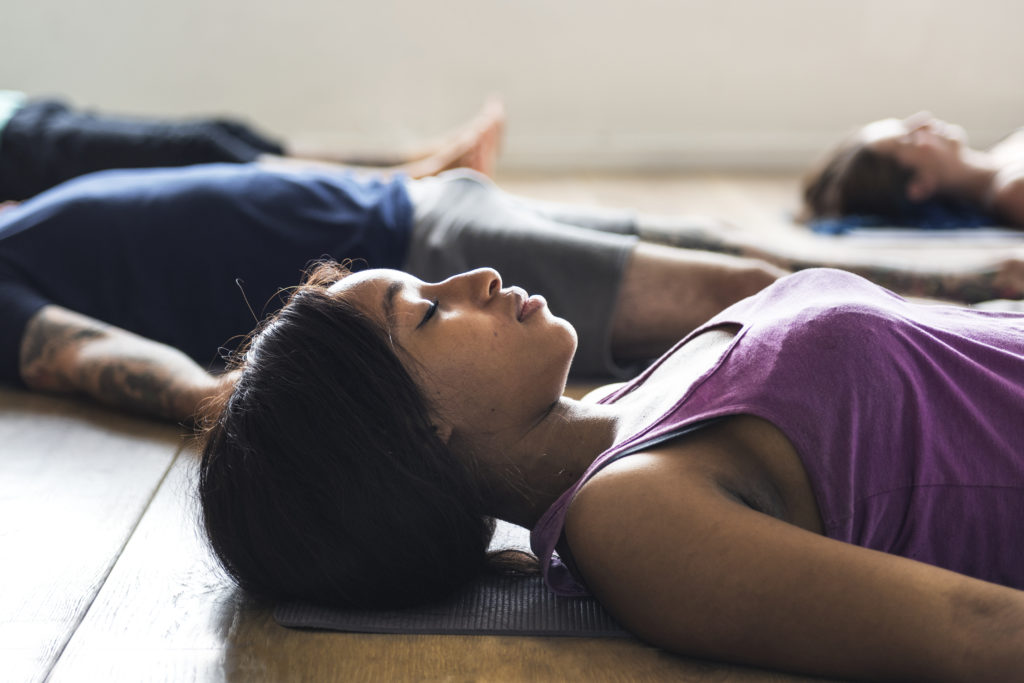 Gail Parker (Ph.D., C-IAYT, E-RYT 500) is a psychologist, a certified yoga therapist, and a nationally and internationally renowned thought leader. In this interview, Yoga U contributing writer Lacey Gibson Ramirez speaks with Gail about her new book, Restorative Yoga for Ethnic and Race-Based Stress and Trauma.

Lacey Gibson Ramirez: What inspired you to start practicing yoga?

Gail Parker: In 1968 I had just returned home from college. By some quirk of fate, I stumbled across a yoga class being offered at the local art museum. There were no yoga studios then. My teacher offered a very gentle form of postural yoga, as well as a Sunday service where he would read from Paramahansa Yogananda’s Sunday Service lectures and then lead us in meditation. Nothing could keep me from attending the yoga class or the Sunday service, where I learned about and experienced the healing power of self-love, self-care, and self-realization. Yoga helped heal my body, mind, heart, and spirit over five decades ago. I have been practicing it ever since.

I didn’t know it at the time, but my yoga teacher was regarded as one of Yogananda’s foremost disciples; I was being introduced to yoga by the teachings of a master. He gave us Yogananda’s Autobiography of a Yogi to read as homework, and we were instructed to practice asana and pranayama on our own in between our weekly classes. Becoming grounded in a personal home practice from the very beginning turned out to be a blessing. It required commitment and helped me cultivate a level of discipline that made me both physically and emotionally strong and more inner-directed.

Lacey Gibson Ramirez: How has your yoga practice evolved over the years?

Gail Parker: I have returned to my home practice. As you mature, your body changes. Your relationship to the physicality of yoga changes. I was introduced to yoga as a complete practice which included the yamas (ethical precepts) and niyamas (personal practices), asana (physical postures), breathwork, and meditation. The postures were simply there to support you in going deeper into your spiritual practice. That really has always been my foundation.

Lacey Gibson Ramirez: What drew you to Restorative Yoga?

Gail Parker: I was a practicing psychologist when I decided to take yoga teacher training to go deeper into the practice. That’s where I was introduced to Restorative Yoga. It was very clear to me that Restorative Yoga helped cultivate an embodied sense of self—that supports people in developing an internal focus. It invites people into realizing, through their own experience, “Oh my feelings are in my body, my stress is in my body, not in my mind.” The stress triggers may be external, but your experience is internal, and it’s real. You’re not making it up. This awareness is empowering.

Restorative Yoga has the capacity to support the development of an inner gaze, and it impacts the nervous system in a way that brings it into balance, offering an experience of equanimity.

Lacey Gibson Ramirez: How has practicing Restorative Yoga influenced you off the mat?

It supports integration of the five aspects of being: the physical body, the breath body, the emotional body, the intuitive body, and the spiritual body. It does this in a different way than a more active practice does. Because you’re still throughout the practice, you have an opportunity to go deeper into the stillness. That’s not easy, and it wasn’t easy for me. There were times when I felt like I wanted to jump out of my skin, but the practice supports you in learning to feel safe enough to be still, even when you are uncomfortable. Off the mat, the ability to pause before taking action supports wise action.

I remember a time in my life when I was experiencing a lot of fear and anxiety. Since I don’t like feeling that way, I tried every way I knew how to avoid, ignore, and talk myself into feeling better. It didn’t work.

One day, I couldn’t do it anymore, so I stopped trying. I surrendered. I remember being in Savasana, and there was this whoosh of energy coming through me. I remember thinking, “Oh, that’s what fear feels like.” And then, it was gone. It was amazing to me that that’s how it works. And I really have not had much fear since then.

Lacey Gibson Ramirez: What inspired you to write Restorative Yoga for Ethnic and Race-Based Stress and Trauma?

Gail Parker: When I closed my psychotherapy practice five years ago, at the time I was a faculty member in the Beaumont School of Therapy in Michigan, teaching people who wanted to become yoga therapists how to utilize yoga practices to support emotional balance, reduce stress, and recover from emotional trauma.

The decision to close my practice coincided with the death of Michael Brown. There was a lot of angst among people who were overwhelmed and traumatized by the ongoing news reports of senseless, vicious, and arbitrary murders of unarmed Black people. There needed to be interventions that could support people in managing their own stress and trauma and the real fear and vulnerability that people felt regarding these race-related violent acts. While there was some research to support yoga practices as therapeutic interventions for Post-Traumatic Stress Disorder (PTSD), there was no research or trauma-informed yoga therapy practices that I was aware of to support recovery from Race-Based Traumatic Stress (RBTS), which is different from PTSD.

There are major differences between the two. The core stressor of PTSD is a life-threatening event. It is regarded as a psychiatric disorder and is treated as a dispositional problem based on a past event that the person has not yet been able to process and recover from. The core stressor of Race-Based Traumatic Stress is any external race-related event that causes emotional injury. It is ongoing, recurrent, and cumulative, and is regarded as situational, or an external problem that causes emotional pain. The responses to the emotional injury are not regarded as disorders, but as normal responses to an emotionally painful experience. Given these distinctions, it was clear to me that Race-Based Traumatic Stress was unique and should be approached in a unique fashion.

In 2018 after giving a plenary speech and workshop, at the International Association of Yoga Therapists yearly Symposium on Yoga Therapy and Research conference, on the topic of yoga therapy’s potential to support stress reduction and recovery from Race-Based Traumatic Stress, I was approached by a publisher and asked to write a book on the topic. So that’s how my book Restorative Yoga for Ethnic and Race-Based Stress and Trauma was born.

Lacey Gibson Ramirez: What was the greatest challenge in writing Restorative Yoga for Ethnic and Race-Based Stress and Trauma?

Gail Parker: The first chapter in my book is called “The Wounds Heal but the Scars Hurt.” I tell stories in the book that required me to be open, honest, and authentic and that brought up painful memories as I shared experiences of racial wounding I’ve had, some past and some current, and that other people have had as well. To approach all of that with candor and a sense of vulnerability—that was the hardest part.

Lacey Gibson Ramirez: What do you hope that readers take away from Restorative Yoga for Ethnic and Race-Based Stress and Trauma?

Gail Parker: People will take away what they need. I’ve gotten a lot of feedback, and the feedback that I’m getting from people about what they are getting out of this book is that it’s all deeply personal to them. I want you to have your own experience of it and take what you need from it.

Lacey Gibson Ramirez: What are your hopes for the yoga industry in the future?

Gail Parker: When I began to practice yoga, it was not an industry. It was a practice. So, when I’m teaching, I’m sharing a practice. I see the potential for yoga to be a very powerful self-care practice that supports health and wellbeing. When it is a complete practice, when you’re following the yamas and the niyamas, when you’re doing breath practices, when you’re meditating, and you’re practicing some form of asana, you’re taking really good care of yourself. That’s where I’d like to see the practice of yoga go. I do not have any insight into the future of yoga as an industry.

Lacey Gibson Ramirez: Is there anything else that you’d like to let readers know?

Gail Parker: I’m glad that the conversation is opening so that we can begin to talk about and validate one another’s experiences. Yoga is about union, connecting breath to movement, connecting with one’s own inner being, and connecting eye to eye and now heart to heart because we can’t now physically connect. We have amazing tools that we can use to support each other in our sense of wellbeing to create welcoming communities to support each of us in being who we are. That’s what I like about yoga. That’s what I think yoga ought to be about. That’s the world according to Gail.

Gail Parker, Ph.D. C-IAYT, RYT-500 is an author, a psychologist, a certified yoga therapist, and a lifelong practitioner of yoga. She became president of the Black Yoga Teachers Alliance (BYTA) Board of Directors in 2020. She is well known for her pioneering efforts to blend psychology, yoga, and meditation as effective self-care strategies that can enhance emotional balance, and contribute to the overall health and well-being of practitioners.

Her first book, Restorative Yoga for Ethnic and Race-Based Stress and Trauma, offers self-care strategies and invites everyone, not just those directly impacted, to explore the intersection of yoga, race, and ethnicity, and to consider the psychological impact of race-based stress and trauma on all of us.

Lacey Gibson Ramirez is a Boston-based ERYT-200 yoga teacher and a freelance writer. Through her teaching and writing, she seeks to make yoga accessible, inclusive, and equitable. Lacey has completed certifications in Prenatal Yoga and Barre as well as trauma-informed yoga trainings. Additionally, she holds a Masters of Science in Global Health and Population from Harvard T.H. Chan School of Public Health. To learn more and connect, visit her website laceygibson.com