Santosha: How Yoga Can Help You Realize that You’re Enough 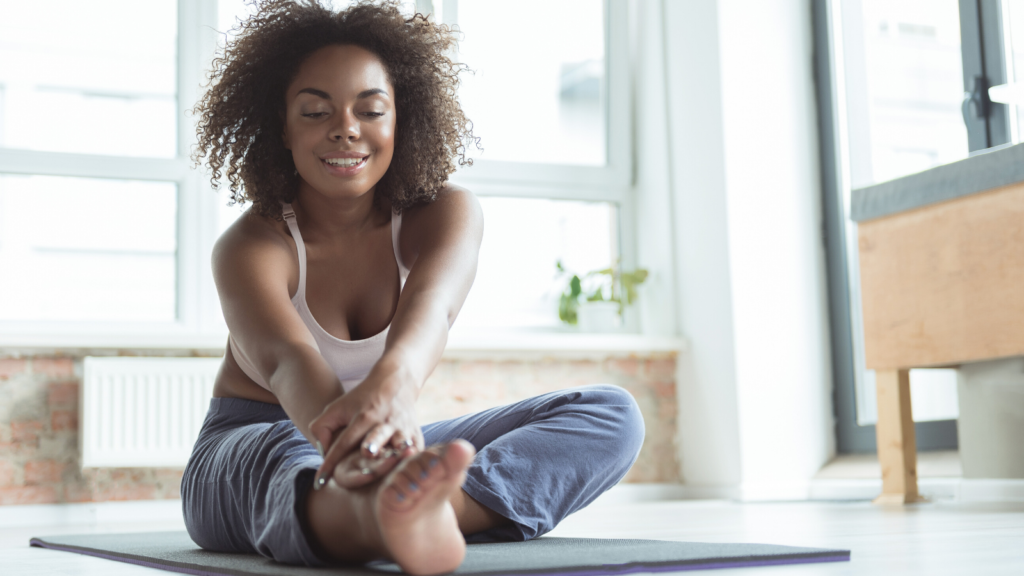 For me, fortunately, having enough was not an issue, but being enough was my sticking point, and the factors were personal and cultural. In 1980, I was 37 years old, divorced, a single parent with a full-time job in broadcasting, and 21 credits toward a master’s degree in communications. Picture that scenario and read the subtitle:

“Middle-class, African-American woman/feminist tries to “do it all” and be a “credit to the race” to prove herself competent, capable, connected, and enough.”

For those who may not understand the “credit to the race” reference, it’s a term used by many minority groups whose difference in race or ethnicity is an implication that each of us needs to earn respect, not as an individual with distinct talents and skills but on behalf of the whole group, to help dispel, or at least not add to, stereotypes often held by the majority. That’s a heavy burden and it weighed heavily on my mind.

The cues I was getting from society and my family fed my directives as a woman to “do it all,” and as an African-American, to be a “credit to the race,” but inside I felt crazy. Underneath my struggling and juggling, I was constipated and stressed. I developed temporal mandibular joint dysfunction (TMJ). There was not enough time, not enough energy, and not enough of me to go around to do all that was expected of me and all that I expected from myself. What to do? I started practicing yoga—first, because the postures helped me release and manage stress, and then because I felt yoga doing something else that I could not put my finger on.

By the time 1995 rolled around, I got a glimpse of that “something else” when I began learning about Patanjali’s Yoga Sutras from I. K. Taimni’s book The Science of Yoga. As I read through niyama, the second set of yoga disciplines that lay the foundation of yogic life, I was drawn to sutra 2.42 and immediately recognized that santosha (contentment) was a concept that resonated deeply to my feelings of “not being enough.”

From the book: “It is necessary for the aspirant for the Yogic life to cultivate contentment of the highest order because without it there is no possibility of keeping the mind in a condition of equilibrium.”

I figured if I could cultivate a sense of contentment, maybe I could recognize or create an internal sense that who I was, was enough. A tall order, but worth working on.

Fast forward to 2002. By this time, I realized that I could not “do it all” without risking my health and my sanity. I had given up the business suits and heels, along with several committees and board positions. And yes, as a result, external validation from a number of people and organizations melted away like cold butter on a warm summer sidewalk. I was still struggling with the “credit to the race” directive but had begun questioning what that really meant. Did I truly need to fit someone else’s image of what that was or looked like? Could I be a “credit to the race” and still be me? I didn’t know, but I felt myself inching closer to santosha and that was a huge payoff in my mind.

It was a yoga weekend in New York’s Catskill Mountains when the concept of santosha shifted from an intellectual idea to a cellular understanding. I was in the middle of a sweat-popping Surya Namaskar (Sun Salutation) strength series, struggling to hold up my body’s weight on one foot and one hand in Vasisthasana (Side Plank Pose).

“Hang in there,” said the teacher. “Breathe. Feel your power. Let me hear some deep sighs.” I sighed and hung in. Next came alternate leg lifts and Salabhasana (Locust Pose). I followed along carefully, feeling how much my spine had loosened up over the years. Glued to the ground from chin to pelvis, I inhaled both my legs off the ground and felt them “float up.”

“This is a powerful strengthener for the back,” said the teacher, “so squeeze that butt. A few groans and sighs would feel good about now.” My legs ached with the effort but I groaned and sighed and squeezed and held just a bit longer than I thought I could before lowering them. At last, Savasana!

“Just let yourself blob out on the ground and feel the energy circulate.” Her voice was soft, soothing, and very musical. “Welcome the benefits of the universe. Feel yourself melt into the ground. Breathe deeply. Inhale through the head; roll the breath down the body. Exhale it out through the toes. Relax.”

Being away from home with all family and work responsibilities postponed, I found myself, in that moment, floating somewhere between here and there at the same time. Grace, surrender, and santosha! In The Secret Power of Yoga, Nischala Joy Devi, comments on Sutra 2.42:

“When at peace and content with oneself and others (santosha), supreme joy is celebrated. By this affirmation, we firmly identify with our inner essence rather than with external objects. Our identification then travels with gratitude, appreciating how much we have rather than how much we want.”

It was a long process, but when I look back, I realize that it took 37 years for the threads of external directives, striving, and “not enough” to tie themselves into knots big enough to feel. So, does it really matter that it took another 35 years to untie the knots and let the threads dissolve? Nope. In the end, the only thing that matters is that through yoga, I found the discipline to work the issue through moment-by-moment, bit-by-bit, and thread-by-thread.

Today at 71, I’m a lot better at managing stress. I haven’t been constipated in years. My TMJ bite plate gathers mildew on the top shelf of the medicine cabinet. And my daily yoga practice is as important to me as breathing. Of course, the physical practice does not look like it did in 2002. Pranayama and meditation make up a larger percentage. My physical practice varies depending upon my needs for the day. Sometimes it’s stronger—I love Phalakasana (Plank Pose)! And sometimes it’s slow, flowing Sun Salutations or 10 minutes in Viparita Karani (Legs-up-the-Chair Pose).

I rejoice in the fact that underneath the “African,” underneath the “American,” and underneath the “woman,” is a being who can occasionally and surprisingly “be here now,” and be content. In those moments, I can rest amid chaos and be present in the midst of my life with all its joys and problems. I can experience this and me at the same time. I am competent, capable, connected, and a credit to universal consciousness in all its forms. And that is enough.

Beth Gibbs, MA, is a certified yoga therapist through the International Association of Yoga Therapists and a faculty member at the Kripalu School of Integrative Yoga Therapy. She holds a masters’ degree in Yoga Therapy and Mind/Body Health from Lesley University in Cambridge, MA. She is the author of Ogi Bogi, The Elephant Yogi, a therapeutic yoga book for children and a Yoga Nidra MP3, Release, Relax and Let Go. Beth is an experienced workshop leader and public speaker. She blogs at bethgibbs.com