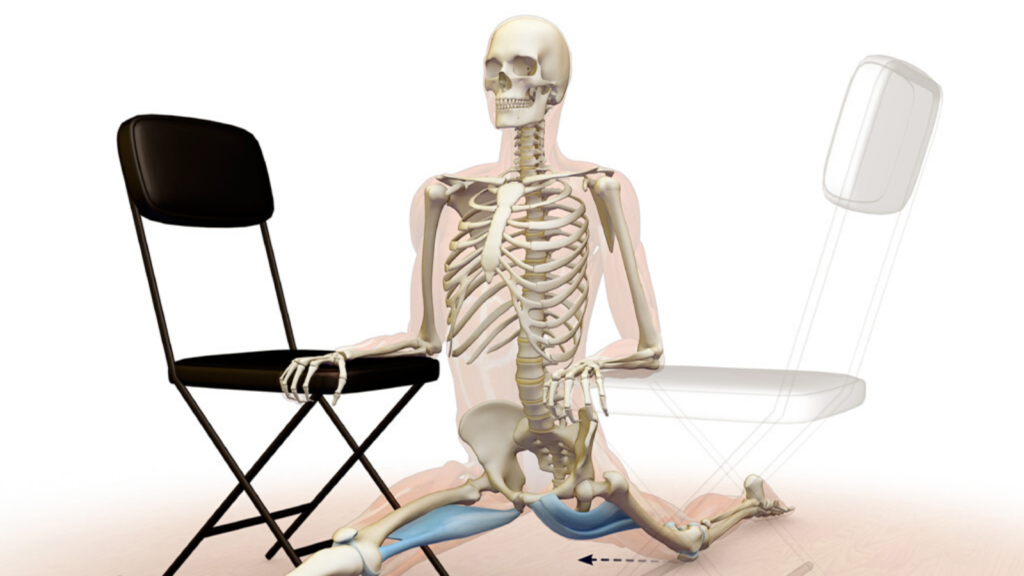 To paraphrase the poet William Blake, you can see the world in a grain of sand. Similarly, you can learn a great deal about all asanas by carefully studying one. For this blog post, I focus on Hanumanasana (Monkey Pose or Front Splits). I use this pose in workshops to illustrate such factors as pose analysis, agonist/antagonist muscle pairs (and their synergists), physiological reflex arcs, and stretching biomechanics.

First, let’s look at the muscle-tendon unit—the muscle and its tendon—to see what lengthens in the pose. The muscle-tendon (MTU) unit is composed of several elements. These include the contractile structures (sarcomeres) and the fascial elements that surround the muscle fibers and tendons. Although these elements are often presented separately in articles on the science of stretching, in reality, they are inextricably linked to one another.

All of these elements contribute to muscle contraction and stretching. In addition, many factors contribute to the way a muscle lengthens, including the viscoelastic properties, creep (a type of deformation that has been postulated for fascial elements), neurological/psychological factors (such as muscle memory and tolerance), and extra muscular links to synergists. Individual muscle architecture or shape also plays a role. Below, I include several references from the scientific literature that discuss these factors in greater detail.

Next, there is the timing of the stretch or how long to hold it. I derive my personal approach to timing the stretch in Hanumanasana from published biomechanical studies on stretching. These studies indicate that the majority of lengthening or release of the muscle-tendon unit takes place in the first 20 seconds of the stretch. Similarly, when repeating a stretch, the lengthening of the muscle-tendon unit appears to diminish with each successive stretch, reaching its maximum at the fourth stretch, after which little additional length is gained by further stretching. (Image right: Cross-section of muscle illustrating the contractile sarcomeres with fascial elements such as the perimysium.)

We provide an illustrative curve for this process below. You can see the experimental curves in the referenced articles (1, 2.) Note that each successive lengthening of the muscle is followed by a brief recovery period in which it is released from the stretch. This is important because one two-minute stretch is not equivalent to four 30-second stretches. Accordingly, I divide my approach to Hanumanasana into four consecutive stretches—each focusing on a different muscle group. Obviously, this is only one of the many ways to approach stretching. It is, however, a method I have found beneficial for working on specific poses such as front splits.

To begin, I analyze the positions of the major joints in Hanumanasana. For example, the back hip is extending. This means that the agonist muscles for this part of the pose are the gluteus maximus (the prime mover of hip extension). The synergists of this action are the posterior portion of the gluteus medius and minimus, the hamstrings, and the adductor magnus. Next, I use this analysis to determine which muscles are stretching. Extending the hip lengthens the hip flexors, including the psoas and its synergists. Then I apply physiological reflex arcs, including proprioceptive neuromuscular facilitation (PNF) (3,4,5) to gain length in the muscles during successive 30-second stretches.

(Hanumanasana (front splits) illustrating the positions of the major joints)

This is the fourth and final stretch of the series. In this step, I focus on stretching the synergists of hip flexion and extension that are located laterally or on the outside of the hips (for the back and front leg respectively). For the front hip, the synergist of extension includes the posterior part of the gluteus medius and gluteus minimus.

For a balanced stretch, I repeat the series on the other side. I allow a 48-hour recovery period after applying proprioceptive neuromuscular facilitation stretches. I never force myself into the pose, but rather use physiological reflex arcs to gently lengthen the muscles. I also use visualization and sensation of the muscles I’m stretching to focus my Drishti for a safer and more effective practice. I slow my movements as I near the endpoint of the stretch and come out of the pose carefully. This aids to prevent injury.

Remember that not all poses are suitable for all practitioners. Always practice under the direct guidance of a qualified instructor; use their assistance to determine modifications or suitability of a given pose for your individual practice. Always consult your healthcare provider and obtain medical clearance before practicing yoga or any other exercise program.

(Agonist (blue) and antagonist (red) muscles of the hips in Hanumanasana)

Reprinted with permission from the Daily Bandha

3d Graphic Designer / Illustrator Chris Macivor has been involved in the field of digital content creation for well over ten years. He is a graduate of Etobicoke School of the Arts, Sheridan College and Seneca College. Chris considers himself to be equally artistic and technical in nature. As such his work has spanned many genres from film and television to videogames and underwater imagery.