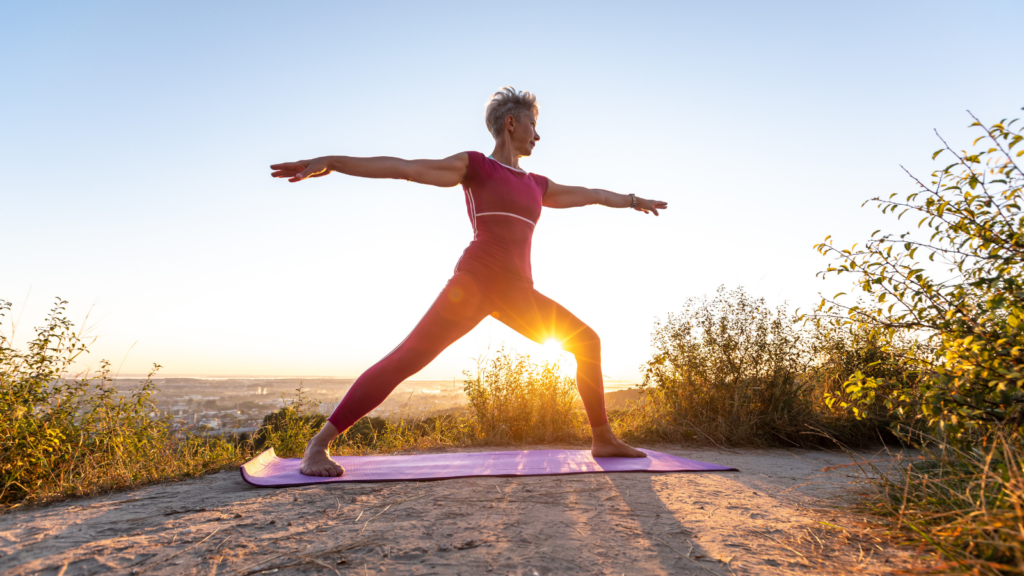 In my first article, we reviewed the starting point of anatomy with anatomical position. If you missed it, you can read Yoga Anatomy Language: Part I here. From here we can move on to naming some major movements. In this article, we’ll review the major movements of flexion, extension, abduction, adduction, external, and internal rotation.

There are only three dimensions or planes to move in! Every motion is simply some combination of these three ways to move. To break out the fancy words, moving our body parts in front or behind is movement in the sagittal plane. Movement out to the sides or back toward the middle is in the coronal (a.k.a. frontal) plane. Rotational movement is in the transverse (a.k.a. horizontal) plane. Yes, two of the planes have additional names to try to confuse us even more!

There are specific names for the movements that happen in each plane, so let’s review the major movements. As a side note, keep in mind that movement occurs at joints! So, we are always referring to a joint when talking about a movement.

Sagittal plane motions simply involve moving body parts in front of you or behind you. First, we have flexion, which is decreasing the angle between the two parts of a joint. Most of these angle decreases take place in the front of the body (except for the knee). Examples are flexing your elbow in a bicep curl or flexing your hip in Standing Forward Bend Pose (Uttanasana). The spine also flexes when you decrease the angles between your vertebrae in the front of your body when rounding forward.

Then we have extension, which is increasing the angle between two parts of a joint. This is pretty much moving the joint in the opposite direction of flexion. Examples of extension include backbends, straightening your elbow or knee, and your rear leg in Warrior I Pose (Virabhadrasana I). Sagittal plane movements are mostly seen in poses where your hips are facing forward. Think Sun Salutations (Surya Namaskara) and Warrior I Pose.  (The asana photo shown above is Reclining Hand-to-Big-Toe Pose or Supta Padangusthasana.)

Motions in the coronal plane involve moving body parts out to your sides or in toward the middle. Movement out to the side is called abduction. Getting abducted is getting taken away, so just remember abduction is moving away from the body (the midline). Abduction can be seen in Triangle Pose (Trikonasana) and Warrior II Pose (Virabhadrasana II) (Warrior II Pose shown in the photo above using a chair as a prop). In both of these poses, the back hip is abducted because the thigh moves away from the midline of the body.

The other major movement in the coronal plane is adduction. It is unfortunately just a subtle change of one letter: aBduction and aDduction. I often say, “a-B-duction” or “a-D-duction” just to be more clear. Adduction is the opposite of abduction. It involves moving toward the body’s midline. A common example is squeezing in the thighs and elbows like in Eagle Pose (Garudasana). I always just remember squeezing in the thighs like the Thighmaster! Abduction and adduction happen mostly during poses where the hips are facing sideways (toward the side of your mat). Think Warrior II Pose.

The final component of movement is rotation, and it occurs in the transverse plane. Rotation is simply twisting; it is to spin on an axis. Rotation is easier to see in the spine, as in the picture above of rotating the head. Spinal rotation, whether in the low back or upper back, can go right or left. When it comes to the arms or legs, we can rotate them toward the midline in front or away from it.

The direction of rotation can sometimes get confusing in the arms and legs because they can be in various positions that make it harder to see. As in the picture above, the arm is already abducted, so remember we have to determine motion as if the arm was in anatomical position. Try rotating your arm while it is lifted (abducted). Then do the same motion with it in anatomical position. It will make more sense then!

Bigger rotation movements happen mostly in twisting poses such as Revolved Triangle Pose (Parivrtta Trikonasana) (Shown in the photo above) and arm rotation happens in poses like Cow Face Pose (Gomukhasana). Rotation can also be used subtly to refine and deepen poses such as using external rotation of the shoulders in Downward Facing Dog Pose (Adho Mukha Svanasana) or internal rotation of the hip joints in Standing Forward Bend Pose (Uttanasana). More on this in the future!

If the terminology gets too confusing, don’t fret! Apply a little aparigraha (non-attachment) and let it go! The terms are just an attempt to describe movement more specifically and accurately. It is just language to help us talk about anatomy and movement. Understanding the concepts of how the body moves is ultimately what supports growing your practice and teaching. Understanding that a joint is flexing simply means that you understand that those two body parts are coming closer together. That just helps us figure out that the muscle and fascia between them are contracting. Knowing what tissues are working helps us to know what to warm up for a practice or when to back off when needed.

Dr. Nolan Lee is a yoga teacher and physical rehab specialist in Chicago, IL, with an extraordinary passion for understanding how the body moves and functions. Nolan has the unique ability to blend the science of anatomy with the art of yoga. With an active practice at this clinic, Balanced Flow Wellness, he practically applies yoga to restore and maintain health. Dr. Lee also holds a Master of Acupuncture degree and is a NASM certified corrective exercise specialist (CES). He enthusiastically shares his knowledge of yoga and anatomy in lectures, workshops, and on his blog.