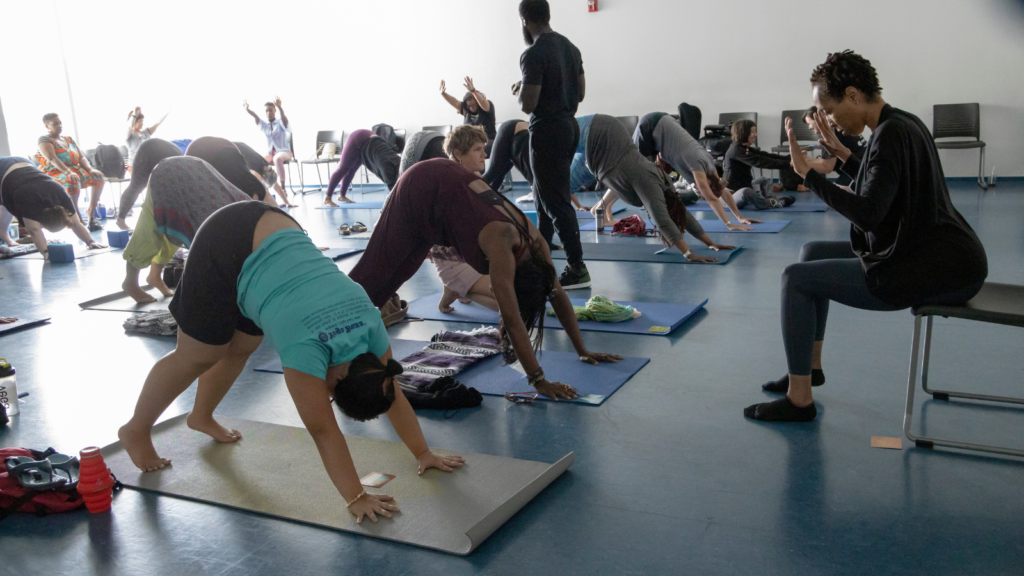 The other day I was talking to a very experienced yoga teacher about the importance of making yoga accessible to people with disabilities. She made an excuse that I’ve heard many other teachers use. Confidently, she explained to me, “I’m not the teacher for everyone,” seeming to brush off any personal responsibility for who was coming (or more importantly, who was not coming) to her classes.

For some reason, our conversation stuck in my head, and I realized that it represents a common misunderstanding around choice versus equity in yoga. This confusion may even be the source of the exclusivity that is often found in yoga spaces.

Of course, I’m not the right teacher for everyone. I get that. But this concept is often used to release us from our responsibility to examine whether our offerings are truly equitable and accessible. In other words, we need to be careful that we’re not hiding our ableism, racism, ageism, fat-phobia, or other forms of prejudice, in the guise of preference and choice.

There’s a big difference between people choosing not to come to your class versus not feeling welcome there. If I make no effort to make my vinyasa flow classes accessible to people with disabilities, it’s not acceptable to simply say, “The people who need this practice will find me.”

Why Are Some Yoga Classes Not Accessible to Everyone

You may not be the right teacher for everyone for a number of different reasons. For example, a student may be looking for a workout and you teach restorative yoga. But it’s important to take a moment and consider if there is anything you could be doing to make your classes more welcoming.

People may not be coming because they don’t feel safe in your class, or they don’t feel welcome in the studio where you’re teaching, or they may have literally been told that they don’t belong in that space. People with disabilities may not be able to get into the space, or BIPOC may feel unwelcome in a mostly White space.

On a larger scale, what would be the motivation for a large yoga chain like Core Power or Yogaworks to train their teachers in making their offerings accessible to people with disabilities? It’s an important question for all of us to consider: what is the motivation behind making our yoga classes and yoga spaces equitable and accessible? Is it based on an individual teacher’s generosity of spirit? Is it because the teacher or studio is dedicated to upholding ethical standards? Or is it because it’s actually the law?

Accessible Yoga According to Yoga Alliance and the ADA

The point is that you need to be willing and able to be the teacher for everyone, even though not everyone will come to your classes, at least according to the Americans with Disabilities Act (ADA). This month is the 30th anniversary of the ADA, which marked a major milestone in the disability rights movement.

Title 3 from the ADA applies to Public Accommodations, which includes yoga classes, workshops, studios, and trainings. “This title directs businesses to make ‘reasonable modifications’ to their usual ways of doing things when serving people with disabilities. It also requires that they take steps necessary to communicate effectively with customers with vision, hearing, and speech disabilities.”

In February, Yoga Alliance released their updated Code of Conduct, which includes a reference to following the ADA. This new code includes a mandate to not only avoid discriminating against people from marginalized populations in yoga but to seek to “actively include” them. This shift in Yoga Alliance’s policy is new, and we are yet to see how it will be implemented. But it’s clear that many studios and training programs are currently going against this code.

I recently heard from a person with a disability who was told that they couldn’t graduate from their 200-hour yoga teacher training program unless they could “perform” certain asanas. It seems clear that is an example of not following the message of active inclusion, or the ADA’s mandate to make reasonable modifications to the usual way of doing business. All yoga teachers, studios, and trainers need to become intimately familiar with Yoga Alliance’s new code, as well as the ADA, and make sure that we are working towards a yoga community that embraces difference and diversity.

Yoga Alliance Code of Conduct: How to Make Your Yoga Classes Inclusive

Code Principle 6 — Actively Include All Individuals

Under Code Principle 6, Members MUST NOT discriminate against and SHOULD actively include all individuals. Members are expected to go beyond basic legal prohibitions against discrimination and, within their scope of practice, actively include, accommodate, and welcome all who wish to be included in the practice of yoga.

Code Principle 6 includes, but is not limited to, the following:

b. Seek Active Inclusion: Members SHOULD seek to actively include, accommodate, and welcome persons who are typically excluded on the basis named above in ‘Avoid Discrimination’ as a committed practice towards creating equity.

c. Provide Reasonable Accommodations: Members SHOULD understand and facilitate to the best of their ability reasonable accommodations for people with disabilities. Members are responsible for complying with disability laws and regulations applicable in their jurisdictions, including the Americans with Disabilities Act for U.S.-based Members. For reference, the United Nations Department of Economic and Social Affairs provides a resource to Disability Laws and Acts by Country/Area which may be applicable in particular jurisdictions.

d. Establish Reasonable Physical Location: Members SHOULD carefully consider the safety and accessibility of the physical location(s) of their yoga classes and workshops.

Want to learn more from Jivana Heyman?  Check out Finding Your Inner Teacher: The Yoga of Empowerment.

Reprinted with permission from the Accessible Yoga Blog.

Jivana Heyman, C-IAYT, eRYT 500, is the founder and director of Accessible Yoga, an international non-profit organization dedicated to increasing access to the yoga teachings. Accessible Yoga offers Conferences, Trainings, and a popular Ambassador program. He’s the author of the book, Accessible Yoga: Poses and Practices for Every Body (Shambhala Publications), co-owner of the Santa Barbara Yoga Center, and an Integral Yoga Minister. Jivana has specialized in teaching yoga to people with disabilities and out of this work, the Accessible Yoga organization was created to support education, training, and advocacy with the mission of shifting the public perception of yoga.

Yoga Revolution: A Call for Social Justice On and Off the Mat (A Book Review)